The Hidden Horror of Homosexuality: RAPE

Here are some Gay facts the LGBTQ don’t want you to know AND homosexuals are probably quite clueless themselves. 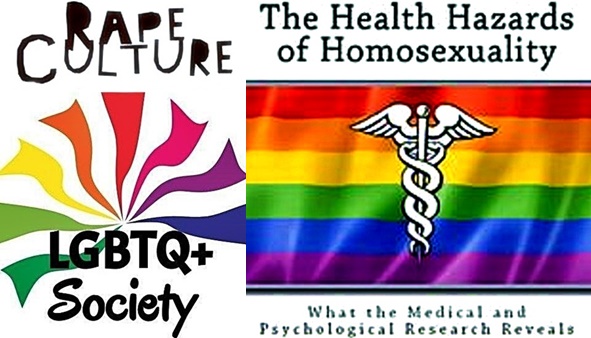 Your generosity is always appreciated:
Please Support SlantRight 2.0
Or support by getting in the Coffee from home business –
OR just buy some FEEL GOOD coffee.

Homosexuals have been allowed to serve openly in the U.S. military since the disastrously misguided repeal of Don't Ask, Don't Tell in late 2010. President Obama was able to ram the repeal through just under the wire because the Democrats temporarily held both houses of Congress, a situation that would change with the election in the fall of 2010. Elections have consequences, and open homosexuality in the military was one of the unfortunate consequences of naive voters placing regressives in office.

One of the complaints many of us had at the time, and one of our reasons for opposing open homosexual service, had to do with the numerous pathologies associated with homosexuality. One of them is rampant promiscuity. Psychology Today (note: not a part of the vast right-wing conspiracy) said in 2010 that one of the features of homosexuality is "the quantity of homosexual men's preferences, as compared to those of homosexual women. Homosexual men are famously promiscuous, a fact that became well-known with the onset of AIDs, when studies of gay men who were HIV positive revealed average numbers of partners in the hundreds." (Emphasis mine.)

According to a study by researchers Bell and Weinberg, 28% of homosexual men have more than 1000 lifetime partners. An astonishing 83% of them admit to having more than 50 lifetime partners. This is irrefutable evidence of a twisted and disordered sexual compulsion among gay men, which drives them into unrestrained and dangerous sexual adventurism. An alarming 79% of homosexual men say that more than half of their sexual partners were virtual strangers with whom they only had sex one time. Among heterosexuals, by comparison, the average number of lifetime partners is around seven.

It should come as no surprise, then, that not only is promiscuity a problem with homosexuality, but the frequency of sexual violence among homosexuals is a huge, though largely unacknowledged, problem. According to the Centers for Disease Control, homosexual men experience sexual violence from intimate partners at twice the rate of heterosexual men, 40% to 21%.

In war settings, homosexual rape can reach epidemic proportions. According to the Guardian, "In El Salvador, 76% of male political prisoners surveyed in the 1980s described at least one incidence of sexual torture. A study of 6,000 concentration-camp inmates in Sarajevo found that 80% of men reported having been raped."

The "most prolific rapist in British legal history" is a homosexual who preyed on heterosexual men and filmed the rapes, compiling hundreds of hours of footage. He was just sentenced to 30 years in prison after being convicted of 136 rapes, and police believe there are 70 more of his victims out there.

But most disturbingly, homosexual rape is, just as we predicted, a serious problem in the American military since the repeal of Don't Ask, Don't Tell. The Department of Defense just released its biannual report on sexual assault in the military, and the numbers are horrendous for heterosexual men who are forced into close quarters with men who turn out to be homosexual predators.

In the last two years, 7,500 men – at minimum – were victims of contact or penetrative sexual assault, a number 38% higher than just two years ago. Lest you think my column title is exaggerated, Yahoo News, not exactly a member of the vast rightwing conspiracy, headlined a story this way: The hidden tragedy of male sexual abuse in the military.

This number – 7,500 – is almost certainly too low by a factor of five. According to the DOD, male victims only file reports of assault 18% of the time, even though they represent a shocking 42% of the victims of sexual assault in our military. If the DOD is right, the total number of males who are victims of homosexual sexual aggression is closer to 40,000. Even in our darkest imaginations, we in the pro-family community had no idea things were going to get this bad this quickly.

The effects of military sexual trauma (MST) in male victims include depression, substance abuse, paranoia, hypervigilance, anger, and feelings of isolation. Many turn to booze and drugs to numb the pain, and some commit suicide. This problem is so bad that the DOD now believes "sexual assault might be more likely to cause PTSD than combat."

One victim, raped by an instructor in the Air Force in 1966, has never since been able "to sleep in a normal way like people do," and has to "carry extra clothes with me because I soil myself." Another victim was assaulted in a shower at Marine boot camp and still can't shower, even at home, to this day. Even getting close to a shower "makes me want to vomit up every bit of bile I have."

Yet another victim was raped 10 years ago in the shower at an Army boot camp, and the "flashbacks keep me from sleeping.... it's hell, and there's no escape from it."

Another victim had the misfortune of being assigned Jeffrey Dahmer as a military bunkmate in Germany. Dahmer, who went on to be one of the most notorious serial killers of all time, raped and tortured him for 18 months. He went to the brass, but they did nothing to protect him. He wound up in therapy for 26 years and still cannot sleep in a dark room or in a bed (he was raped in a bed).

"If you knew how hard it is to admit your rape," he told the Yahoo reporter. "I'm getting stuck for words. It's hard to admit. Wow. If you're a man, it's very hard to admit you get raped. It takes away from everything you were ever, ever, ever told in life by your mother, your father, everything. It takes away your sexuality; it takes away from you emotionally. You're vulnerable in a lot of ways. You feel that way all the time."

The human cost of homosexuality in the military is devastating, not to mention the military cost to unit morale, retention, and recruitment. Our first commander-in-chief, George Washington, understood all this, and literally drummed homosexuals out of his Continental Army.

Bottom line: every single one of us who said gays do not belong in the military was right ten years ago, and we're still right today.
+++++++++++++++++++
Blog Editor: Rather than capitulate to Facebook censorship by abandoning the platform, I choose to post and share until the Leftist censors ban me. Recently, the Facebook censorship tactic I’ve experienced is a couple of Group shares then jailed under the false accusation of posting too fast. So I ask those that read this, to combat censorship by sharing blog and Facebook posts with your friends or Groups you belong to.
________________________
The author may be contacted at bfischer@afa.net
Follow me on Facebook at "Focal Point" and on Twitter @bryanjfischer
Host of "Focal Point" on American Family Radio, 1:05 pm CT, M-F www.afr.net

RenewAmerica is a grassroots organization that supports the self-evident truths found in the Declaration of Independence, and their faithful application through upholding the U.S. Constitution, as written. Its purpose is to thoughtfully and courageously advance the cause of our nation's Founders.

The organization is for ALL people who consider themselves loyal Americans. It has no philosophy, image, or agenda beyond this one unifying premise: America must return to its founding principles if it is to survive.

RenewAmerica is thus nonpartisan and nondenominational.

Because RenewAmerica is GRASSROOTS at heart, it remains fundamentally independent, creative, and energetic in pursuing its distinctive agenda in the cause of strengthening America. We welcome your creative energy in this vital cause.

Please join with us. We need your strength.