What Are the Dems Really Hiding? 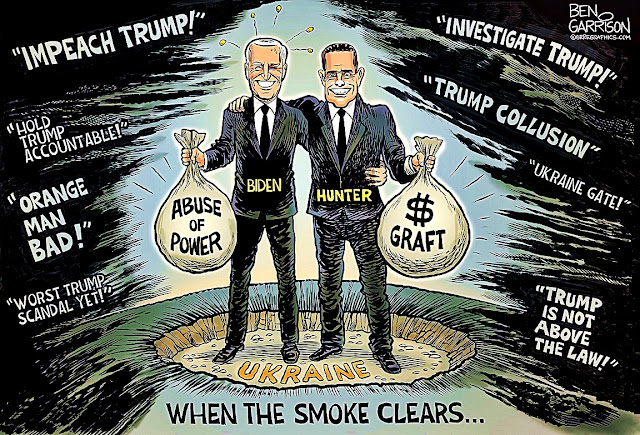 As the Dems read off and eventually lead the House of Representatives Articles of Impeachment based on hate-inspired Trump Derangement Syndrome more than verifiable facts, watch this video.

The video examines Quid Pro Quo Joe Biden & son Hunter corruption that more documentation exists than any faux-corruption President Trump is accused. Things to note is the incredulous corruption inherent in Ukraine that the video hosts speculates (due to connections) quite probably includes the current Ukrainian President Zelensky.

If Ukraine is so corrupt even under Zelensky, should the U.S. abandon involvement with whoever leads the Ukraine government? My guess is PROBABLY NOT. That is as long as a Ukraine government defies Russia, Ukraine makes a great foil against any Russian interests that conflict American Interests.

So what does that mean for Trump and Biden?

As speculated in the video, Americans NEED to know just how much the Dem-darling Obama knew and did about said Biden corruption.

JRH 12/10/19
Your generosity is always appreciated:
Please Support SlantRight 2.0
Support this Blog HERE. Or support by getting in
the Coffee from home business – OR just buy some healthy coffee.

Over the past few days, I dug into Biden's history in Ukraine. What I found was astonishing. Watch the video to see the full extent of Biden's corruption.

Hello, I'm Mr Reagan. My mission is to spread reason and rationality throughout the world. I don't believe in petty motivations, envy, hate, resentment, or greed. I believe in rational solutions to real problems. I believe that we have an obligation to help the less fortunate where they already live. And I believe in judgment, not based on the color of one's skin, but by the content of one's character.